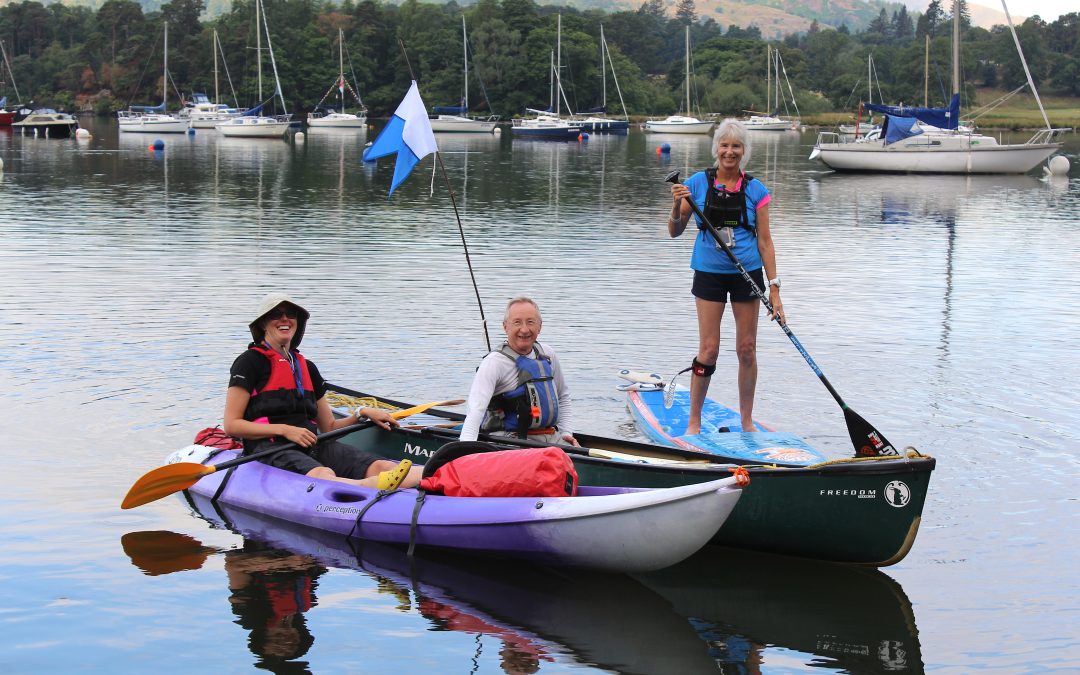 Sometimes you can find yourself part of something that really shifts your perspective. Something that stops you in your tracks for a moment and makes you go ‘wow, just wow!’

A couple of weeks ago I was in Windermere, in the English Lake District, as part of a group of accomplished swimmers who do much of their training at my home from home, Bray Lake. Most of them were there to swim the lake — part way, one way, or more — and the rest of us were there to help make that possible.

They were all amazing but one swim stands out.

For context, the furthest I’ve ever swum is 10k, on a fun day out on the Jubilee River which involved getting out several times to navigate weirs and a fair bit of faffing about. The longest ‘official’ swim I’ve logged is 5k along the river Spey back in 2016.

So it was an absolute privilege to be part of the support crew for true distance swimmer Victoria Moore and her two-way Windermere swim on 23 July. Victoria has completed many of the world’s longer solo swims, including the Channel, and first took on the Windermere double 10 years ago. Her goal was to beat her 2008 time.

To play by the rules, you must wear nothing but a normal swimming costume and goggles. You can’t touch your support boat or get anything from your crew, other than food, drink, and lots of encouragement. 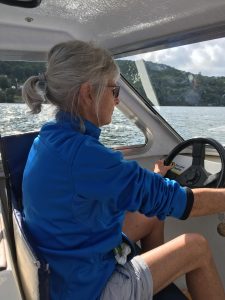 Victoria set off very early from Ambleside with a canoe escort, and our little support team caught up with her an hour or so later after collecting our electric boat. Then we stayed with her as she made her way towards the other end of the lake. This took more than five hours.

Then she came ashore at Lakeside, took three steps (more rules) — and turned around to swim straight back to Ambleside.

It was at this point I really was stopped in my tracks.

I was already in awe of her achievement in swimming Windermere’s 17.5k length so fast and consistently, but turning around to do it all in reverse?

I honestly felt humbled as I watched Victoria walk back into the water — those three steps took a mental strength, an emotional discipline, a focus that’s way beyond anything I’ve ever achieved or even attempted.

Victoria completed her 35k two-way Windermere swim in 11 hours, 6 minutes and 3 seconds — a jaw-dropping 20 minutes faster than her 2008 time. She was more than a little chuffed! And I had the probably unique experience of helping escort her on my paddleboard — together with one mate in a canoe and two more in a kayak — for the last few kilometres back to Ambleside.

Other highlights of what turned into an unforgettable few days of sun and blue skies were forming part of the support crew — me plus Victoria in a kayak and canoeist Kelvin — for another Bray friend’s swim from Ambleside to the halfway point across from Belle Isle, and on another day paddling the full length of Windermere alongside Kelvin in his canoe.

All extraordinary experiences — not going to attempt to rate them! — and just what I needed after a less than satisfactory outcome at the final GB SUP series race at Sandbanks, Poole, a few days earlier…

Let’s just say that my preparatory work in the waves at Hayling Island wasn’t quite enough. My event — the 7k technical race for 12’6” boards — was deliberately scheduled last in the expectation that this would be when conditions were at their most challenging. Why? Because this race was also a qualifier for the ISA World SUP and Paddleboard Championship in China this November. 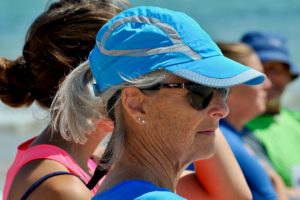 So there was me, ocean novice, lined up with some of the UK’s best — men and women, many of whom live and train on the coast — facing 7k of multiple laps with tricky buoy turns in a sea that can best be described as exceedingly lively and unpredictable.

All of it well and truly outside my comfort zone.

To cut a short story even shorter, I pulled out on the first lap. By then I’d already fallen in a couple of times and could see the tail end of the race pulling further and further away. I just did not want to be that person who was repeatedly lapped, or indeed that person who kept everyone else waiting at the end.

So — for the second time on a SUP — I DNFed (did not finish). Some regrets, of course, but I know I made the right call: as Hayling had shown a week earlier, I don’t yet have enough experience on my Starboard to make sea racing a reality when it gets a bit choppy. Maximum respect to everyone who did finish, especially my awesome role model Susan Jones and Bray club mate Issie Jolliffe, who had an amazing race on her inflatable SUP despite no more ocean experience than me.

Well, first stop it’s back to the beach — and the sooner, the better! And I also need to get some swimming in, as I have the small matter of a race on Arran in five and bit weeks’ time…

Main photo: with Victoria Moore (kayak) and Kelvin Abbott (canoe) before we acted as support for a Bray Lake colleague’s Windermere swim from Ambleside to the halfway point at Belle Isle