When you can’t actually toe the line… 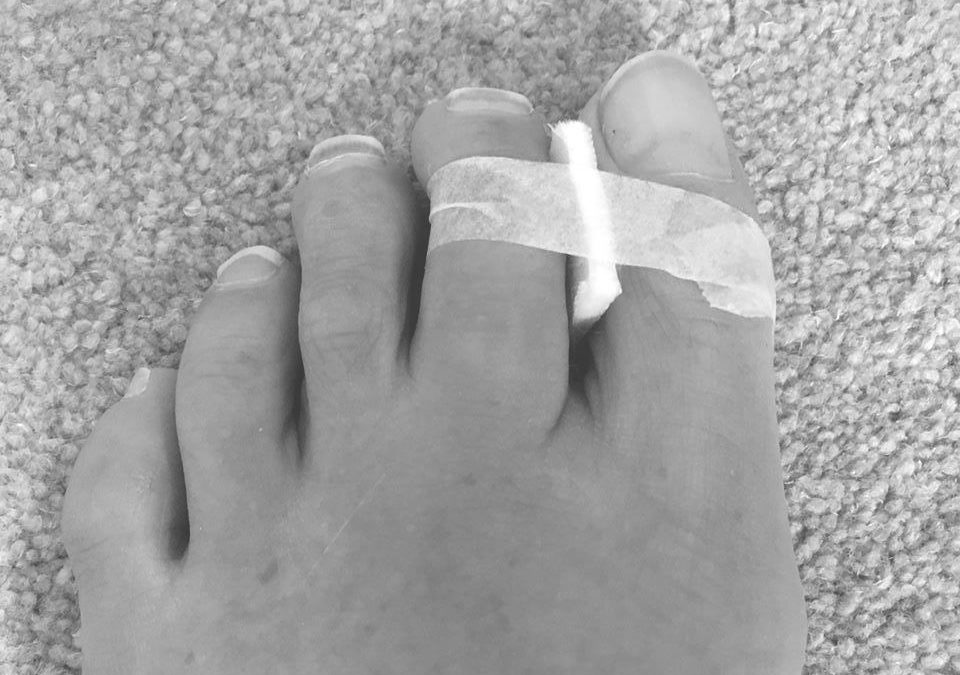 I’d got away with it before, but not this time.

And it’s always the mundane stuff: while I was changing the duvet cover, I slammed my left foot into the very solid leg of the wooden bed frame. All five toes made contact and I felt something crunch.

I gingerly removed my sock to see the toe next to my left big toe doing a pretty good impression of the leaning tower of Pisa. So without thinking, I crunched it back to something resembling upright and sat back to take in the damage.

The NHS only offers you an x-ray if you trash your big toe, so an actual diagnosis has been guesswork. And my guess is I either broke it or it was dislocated and all the ligaments have been in (very) tender healing mode. Or both.

Nearly three weeks on, I’m still not certain. There’s been a lot of bruising — the other toes and a lot of the rest of the foot came out in sympathy — and a lot of limping about wearing shoes as little as possible. I’ve strapped it to its big toe neighbour to prevent another Pisa and had several lovely Pranic energy therapy sessions to help accelerate the healing process.

So I’m getting there, and let me stress that this isn’t an exercise in self-pity — stuff happens, and in the grand scheme of things, this is exceedingly trivial stuff.

What it has been, though, is a salutary reminder to never, ever take your body for granted.

My injured toe is a tiny player and yet the consequences of losing its contribution to the smooth working of the whole machine have been pretty significant.

Until last weekend, no swimming.

Until yesterday, no paddleboarding.

And until some time a good way into the future, no running.

Other types of exercise — including yoga and most strength work — have also taken a hit as they all at some point involve fully functioning toes that don’t screech when weight is applied.

But I’m getting there, and climbing — albeit gingerly and very carefully — back on my beloved Starboard was a massive buzz and definitely a risk worth taking. I’d already cracked the open water swimming a week earlier, just by being very cautious getting in and out of the lake, and that had cheered me up no end, not least because we’re now down to single figure temperatures. I love that cold water challenge and did not want to start losing my acclimatisation.

When it came to paddling, however, there was only one way to find out whether it would be doable and in theory it looks like it might not be — it is, after all, called ‘stand-up’ paddleboarding. But in fact, you don’t need to put your full weight on your toes unless you’re moving around the board to do step back turns or you’re playing in the surf, and I was doing neither.

So on a gentle Bray Lake day, I just planted my feet on my board, set off, and with huge relief quickly realised it would be OK. I was careful, I was slow, but I still clocked up 8k as my body woke up and got back into a familiar and most welcome groove.

Meanwhile, the toe’s healing continued undisturbed — it felt fine when I got off the board; it feels fine now. Phew!

What mattered most though was being back in touch with what drives me, inspires me, and keeps me moving forward. And I am more grateful than ever to my body for making that possible…