We’re really short on folklore in my strange family

It’s Day 16 of my 21 Daring Days, and this has proved a particularly challenging one: ‘Tell a story about a piece of your family folklore. What stories are told again and again? Which ones stand out from your youth?’

One of the stranger things about my strange family is the total absence of folklore.

Yes, hand on heart, I can truthfully say that there was no storytelling as I grew up, no unlikely tales or spiffing yarns that could be tracked back down the generations.

Or even one or two generations.

I suppose it didn’t help that I never knew either grandfather: they died before I was born and both grandmothers had followed them before I was ten. That didn’t leave many of us on either side of the family and — as I’ve already chronicled — my parents avoided them as much as they could get away with.

There are various downsides to this heritage shortfall, but I guess the biggest is that I genuinely don’t know much about where I came from or who those people were.

I know my mother’s father was born in Auxerre in Burgundy and was orphaned young, that he came to the UK in 1898 and never lived in France again. I know that his wife was of London Irish stock, that she was a lot younger than him, and they married just before the first world war in which he won the Croix de Guerre. They had three children — my uncle, my mother, and my aunt. Only my mother had children, and then just the one: me.

On my father’s side, I know my grandparents were both actors and music hall artists — again, with London Irish blood involved — and they too had three children, who between them were responsible for my only first cousins.

After that, it all gets tenuous: there are various other cousins on both sides, and we remain in loose contact, but I sadly share no childhood history — a few fleeting memories apart — with any of them. If there was any folklore floating around, none of it found its way to me.

However, there are glimpses to be had: my second cousin Ali, who now lives in New Zealand, has done a great deal of research into our shared lineage on my father’s side and that’s proved fascinating. She discovered, for example, that when the luxury ship the SS London — a sail and steam hybrid — was shipwrecked amid controversy in 1866, our great-grandfather Alfred White was among the handful of survivors. 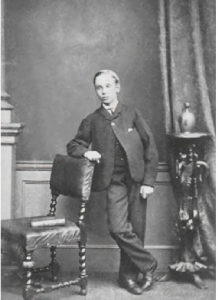 My great-grandfather Alfred White was the SS London’s ship’s boy, aged just 14, and one of only 19 survivors. It’s not known when this formal photo of him was taken.

He was ship’s boy and at just 14 the youngest crew member on board and the youngest survivor. How he ended up on board is anyone’s guess — we have no idea. We do know he went on to change his surname to Byde, marry an actress called Eugenie (yup, that’s why), and become an actor.

But that’s about as far as it goes.

Alfred’s extraordinary life is an exquisite example of the type of family folklore I’d loved to have had handed down to me, a true story then made complete with embellishments, bells and whistles, drama, outrage, intrigue, happy endings, and a few dog-eared photos.

The sort of tale that you can never get enough, that you want to hear over and over again.

But — as I’ve said before — I don’t do ‘if only…’ and if my father knew anything of his grandfather’s extraordinary early life, he never let on.

I am instead just grateful to Ali and her painstaking delving that we now have this bit of famous (not to say infamous) high drama to weave into our history and keep alive for future generations.

Main image shows the SS London, which foundered in the Bay of Biscay in January 1866 with the loss of at least 243 lives. She was en route from Gravesend to Melbourne and badly overloaded. So well-known was this tragedy that William McGonagall even wrote one of his inimitable poems about it — The Wreck of the Steamer London while on her way to Australia.