The long and winding road towards motherhood… 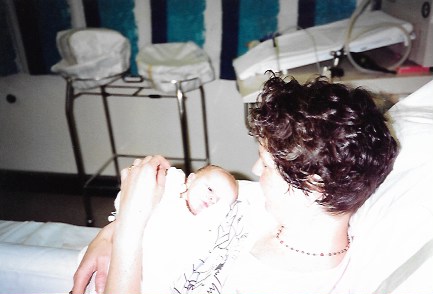 Yay! Half-way through my 21 Days of Transience and for Day 11 I’m taking an unscheduled trip…

This absolutely was not what I’d had in mind.

No, I definitely hadn’t fantasised about being in the back of an ambulance as we made our winding way from Buxton cottage hospital to Stepping Hill maternity unit in Stockport, 16.5 extremely uncomfortable miles away.

Some time earlier, the on-call GP in the Buxton maternity wing had declared that he wasn’t happy having such an elderly primigravida (I was 38) on his watch and decided I should be transferred.

Parents among you may realise that this was never going to be a barrel of fun, but at 8cm dilated it was eye-wateringly not fun.

My plan — and we all make such beautiful birthing plans, do we not? — had been to deliver my child without much in the way of intervention in the friendly cottage hospital, stay there a couple of days, and then head round the corner and home.

And it had all been going really well. After a bit of a slow start, my baby was making fine progress. All I’d needed was the odd blast of gas and air and if I’d been asked to sum up the situation just before the GP’s intervention, I’d have said ‘so far, so good’. And, I suspect, so would the midwife.

Of course, what tends to happen to a woman in labour the minute she’s placed in an extremely stressful situation is that everything grinds to a halt. And that ambulance did the trick perfectly: I remember lying there as we navigated the hairpins down to Whaley Bridge, the kind midwife at my side, and realising that the contractions had stopped.

I stared up at the roof and knew I’d not forget this moment. I was, not unreasonably, now fearful for us both having been entirely confident — less than half an hour earlier — that we were going to be absolutely fine.

There were sound reasons why I’d chosen — with my own GP’s blessing — to have my baby in Buxton and not Stepping Hill. It was large, soulless, and there was inevitably none of the friendly intimacy with the staff that I’d been enjoying up till now.

Nonetheless, the contractions resumed once I’d been freed from the ambulance’s constraints and my baby and I continued our joint venture without much further incident for some more hours.

Eventually — at 2am on Sunday 9 August 1992 — after a rather clumsy ventouse delivery and a ton of stitches, we’d done it and I was handed the fruits, as it were, of my labour.

And, of course, the trauma instantly evaporated and the love affair began.

I only spent one night in Stockport and then the friend who’d been my birthing partner drove us back to Buxton maternity unit.

And what a wonderful, dreamy interlude that became: because I was a single mum and had had so many stitches, they kept us there for the best part of a week. We were unbelievably well looked after and by the time I could sit down without contortion and yelping, my little Claire and I were a perfectly bonded unit and ready to go home.

My daughter spent her first two and a bit years in Buxton, only losing her Derbyshire accent once we’d moved to Cruden Bay and she began making friends at nursery. Now she’s 100% Scottish through and through, even though her birth certificate inevitably says — just a little disappointingly — ‘place of birth: Stockport, Greater Manchester’.