Finding the answer on an Aberdeenshire beach… 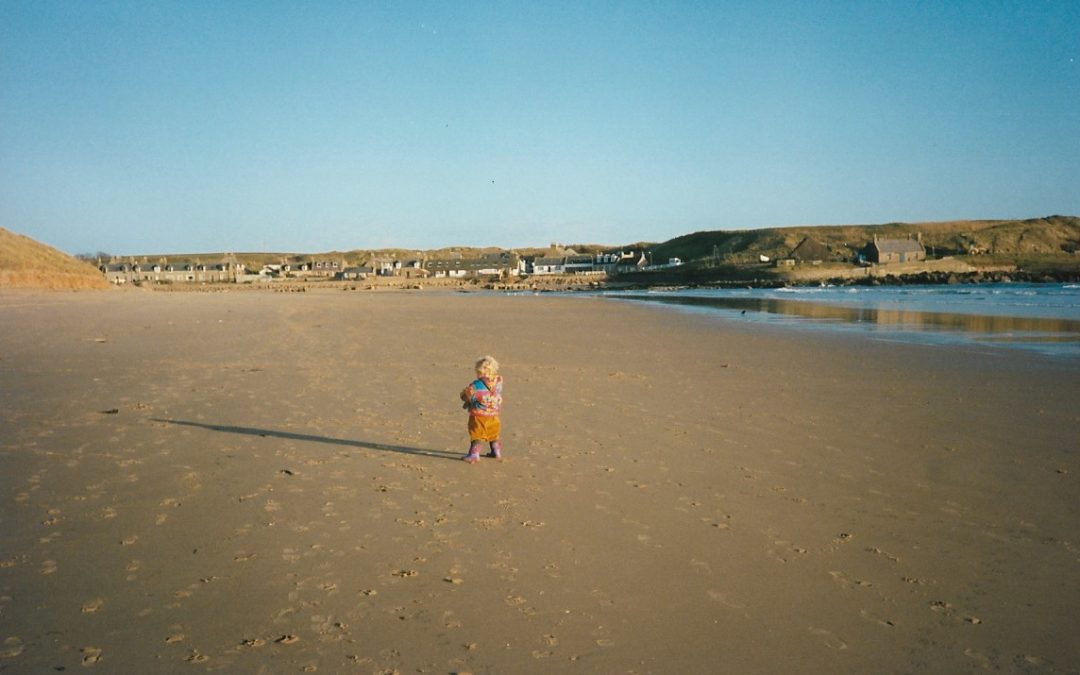 Another week, another in my 21 Days of Transience — Day 10, to be precise, and I’m looking at how a transient thought becomes a reality…

I’d already accepted the job at this point, so it was now just a matter of location and logistics.

It’s November 1994, and I’m standing on the mile-long beach in Cruden Bay, on the edge of the North Sea in Aberdeenshire.

The sun is shining, both sky and sea are sparkling, there’s not a breath of wind, and my daughter — two years and three months old — is having a ball in the golden sand. I look around me: what’s not to like?

A matter of weeks earlier, I’d got the call from the then editor of the Press & Journal offering me a job as a news sub-editor at the paper’s HQ in Aberdeen. I’d applied for this, and I accepted, because the regular sub-editing role I had at the Guardian Weekly was moving from Cheshire to London and freelancing alone couldn’t offer quite enough security.

There was no way I’d leave beautiful Buxton for London, but for Scotland? Well, why not? I’d always loved Scotland, even if I knew nothing about its north-east corner.

So here I was, toddler in tow, checking off houses for sale within commuting distance of Aberdeen and feasibly close to a nursery. I’d not really considered living on the coast until now: my experience of visiting English south coast towns in winter had put me off, and Cruden Bay was only the list because it had a good nursery.

But then we walked hand-in-hand across the wooden bridge separating Cruden Bay’s Harbour Street and the beach. As I watched Claire run off to explore this new wonderland, I asked myself: is this where I want my daughter to grow up?

Six weeks later, we were heading north from Derbyshire — my base for more than 10 years — and were in our new home in time for Christmas.

Altogether I stayed in Cruden Bay for 17 years, getting married and divorced along the way, and witnessing my Claire morph magnificently from toddler to primary school pupil to secondary school student to Abertay University undergraduate.

Those years were not without their moments, of course, and in among the usual rollercoaster of laughter and tears I also quickly learned that wall-to-wall sunshine and no wind is somewhat unusual in November. Winter in north-east Scotland is definitely an acquired taste…

But whenever I go back to Cruden Bay now, it feels like I’m being reunited with a little piece of my heart. Quite why I was led there in the first place — excellent nursery apart — I still don’t know, but I truly can’t imagine it being any other way.