Setting myself a new average SUP speed — and a target to beat! 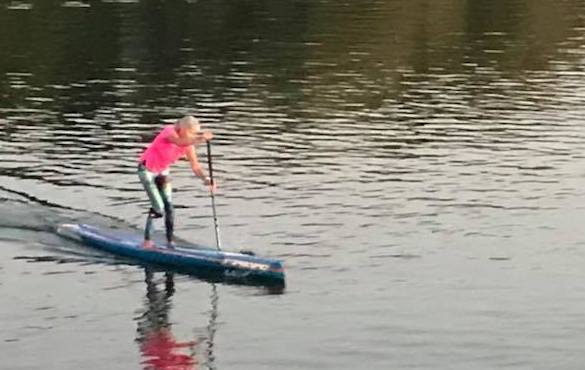 A quick update from the SUP front…

This week I took part in my first standup paddleboard time trial, at Bray Lake SUP Club night on 3 October — and, to my amazement, set my fastest average speed yet!

In the grand scheme of all things SUP, I am very far from fast but it’s another step in the right direction and I went home feeling pretty chuffed with myself. 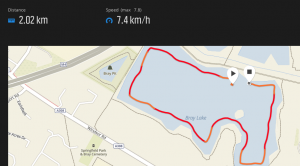 As you can see, my Suunto watch recorded 2.02 kilometres (once around the lake, pretty much) at an average of 7.4kph. And that is a faster pace than I’ve ever managed to maintain before.

The conditions were perfect — flat calm, no wind, early evening — and that obviously helped. But a benchmark is a benchmark, and I’m very happy with that one.

Let’s see how that rolls…

Meanwhile, Saturday 29 September saw me take part in my second British SUP Club Championships, and no longer in the novice class! It was a simply amazing day, from start to finish, and I’m proud to have clocked up a few vital points towards the total that helped place Bray Lake fourth out of 17 SUP clubs from all over England and Wales. (None yet from Scotland, but it’s surely only a matter of time…)

The sun shone all day: as soon as the mist had burned off the lake (I had a quick swim first thing as well), it was wall-to-wall blue skies all day long, no wind, and beautifully warm. Just glorious. 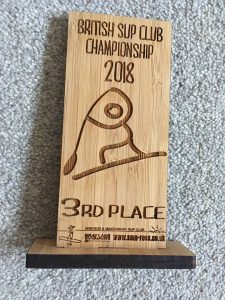 I also came home with some bling — third of three women (all of us over 51!) in the 12’6″ hard board technical race. This event was an absolute blast, and it was brilliant to be racing against so many other paddlers on home turf!  I still have loads to learn about start line and buoy turn tactics — and in particular about not being intimidated by testosterone — but I was more than happy to finish 10th overall out of 25 women in various board classes.

Top half of the field always feels good…

Massive congratulations to everyone who took part — there were more than 220 competitors — and especially to my club mates, including Lisa Walden who took first place in my race class and to Cat Derham and Issie Jolliffe who took first and third respectively in the inflatable class. Plus an enormous ‘thank you’ to the Bray staff who made sure the day ran like clockwork and to Bray Lake member and race organiser Fiona Batson for her jaw-dropping project management skills.

I came away with only one regret: there are no photos of me in action on my beautiful Starboard! Or indeed of me on the podium. Or indeed anywhere at all. Or video. Memo to self: be better organised next year and make sure to get someone to wield a phone in my general direction at some point during the day — and ditto for the rest of the Bray team!

PS: In a final bit of feel-good news, my efforts during the year in the GB SUP National Series helped Bray Lake finish with the top 12’6″ women’s team and come out as top club overall.