You are what you read — my year in books… 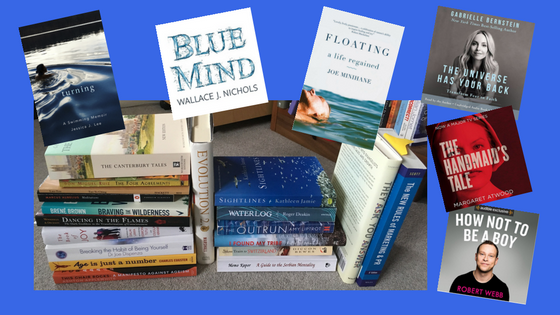 If we are the sum of a whole assortment of life experiences, then books surely have to be right up there.

And while I’m not a book hoover, I do plough my way through a fair few in the course of a year so I thought it would be interesting to take a bit of an inventory on what I’ve read during 2017 and see what has and hasn’t left a mark.

I’ve never done this before, so let’s pick out a Top 10 and see where that leads…

There are, as you can see in the photo, more than ten contenders which means I need to do more than just shuffle the running order around a bit.

1 Out in front by a country mile: Evolution 2.0 — Breaking the Deadlock Between Darwin and Design, by Perry Marshall. Best known as a leading US business consultant, Marshall tackles a behemoth of a topic here, simultaneously pissing off both an international scientific community wedded to neo-Darwinism and the young earth advocates of Intelligent Design.

I was brought up by committed atheists who’d also embraced Marxism in their youth. Both had experienced less than Christian treatment at the hands of the Catholic church as children, so unsurprisingly God had no seat at our table. I took all of this well into adulthood and it’s only been in the past 20 or so years that I’ve stepped back from my full-on agnosticism and widened my perspective somewhat. My deep reservations around organised religion remain, but some of the questions I’ve kept circling back to include these: ‘Well, OK. Big Bang started it, I get that. But where did Big Bang come from? And we know that viruses, for example, are singularly adept at mutating. But how do they know how to mutate, and how do they get it in the right order? Where does the code they have to use come from?’ Then there are all the myriad species out there, us included, with our extraordinarily sophisticated operating systems and intricate DNA — the full complexity of which is only now starting to be understood. The neo-Darwinians continue to argue that evolution is all completely random, it’s down to survival of the fittest, nothing more to see here. But given what we already know in other areas of science — physics in particular — is this view of biology just too simplistic?

This is what lies at the heart of Marshall’s argument, and while I came at it from a place of both curiosity and scepticism — Marshall is a committed Christian and this fact did fuel a degree of cynicism — I was blown away by the depth of his research and the cogency of his arguments which use science to take on both Darwinism and ID.

And I am not alone.

Marshall has launched a $5 million challenge to anyone who can unequivocally identify the origin of life and DNA code — and he is being taken very seriously in the scientific community. His prize judges include for example one of the UK’s most highly respected biologists — Denis Noble, FRS, CBE, the man who developed the first viable mathematical model of the working heart, is founder of systems biology, and is president of the International Union of Physiological Sciences.

Wherever your current thinking lies on this one, I highly recommend Evolution 2.0 — it’s written by a master copywriter who understands the importance of keeping it simple and I challenge you not to stop and take stock by the end of it.

2 Coming at received wisdom from a different direction is Brené Brown in her latest book, Braving the Wilderness. A respected US academic as well as accomplished writer and speaker, Brown homes in on our growing disconnect from others, our unwillingness to do exactly what Marshall has done — move right out of the comfort zone of our own beliefs and opinions and take a stand when something needs to be said and needs to be challenged. Although Brown’s audience is predominantly in the US, everything she says applies equally in the UK. For the silos of opinion constructed around Trump just swap in Brexit and you get the idea — growing entrenchment and narrowing of horizons, increased enmity, all exacerbated by our growing addiction to social media which makes it seductively painless to stick around people you always agree with. Brown is an excellent writer — I listened to her own reading of the book on Audible and also have the print version as this is one I know I’ll keep coming back to.

3 In third spot is the first of several water and swimming-related choices. In The Outrun: A Memoir, Amy Liptrot returns to Orkney and the farm where she grew up after nearly a decade away spiralling out of control in London. She comes back an alcoholic whose life is slipping away from her and the book links her past and present, the flow of the seasons, and the power of the sea and of this ancient land to heal, level out, and restore. Another superbly well written book which haunts and inspires in pretty much equal measure.

4 Full disclosure: it was the TV series wot done it. I first read Margaret Atwood’s groundbreaking The Handmaid’s Tale 30-plus years ago and this time around found it as dark and dangerous a tale as I did then. Of course, we have moved on from the misogynist politics of the 80s that drove her dystopian vision — but then again, given the recent tsunami of abuse claims on both sides of the Atlantic, have we moved all that far? This was another Audible choice and is a perfect on-the-road soundtrack.

5 An outdoor swimming classic next — the late Roger Deakin’s Waterlog: A Swimmer’s Journey Through Britain, which is exactly what it says it is. Published in 2000, well before wild swimming’s current and meteoric UK-wide renaissance, it’s a beautiful blend of memoir, travelogue, and all round celebration of what makes water so magical. It’s also a distinguished naturalist’s snapshot of Britain at the turn of the century, a time that’s already slipped from front-of-mind memory.

Well worth a consecutive read is Floating: A Life Regained, journalist Joe Minihane’s eloquent retracing of Deakin’s footsteps 15 years on. Minihane takes us on  a voyage of personal self-discovery while he explores the British landscape and teases out what’s changed and what hasn’t since Deakin’s day.

6 Still in the water, is Turning — A Swimming Memoir, by Jessica J Lee. Like Deakin and Minihane, Lee’s focus is on wild swimming, this time in and around her adopted home of Berlin where she moves at the age of 28 to work on her thesis. She’s Canadian born of Chinese and British heritage and arrives in Germany alone, and lonely. To combat the worst of her assorted demons, Lee sets herself a challenge: swim 52 of the lakes around Berlin in a year, no matter the weather. What follows is another mix of brave memoir, travelogue and celebration of water, all intricately observed.

7 How Not To Be A Boy, actor and comedian Robert Webb’s manifesto-come-autobiography, was another Audible choice — and I’ll admit it was a tad random. But I absolutely loved this book and looked forward to even short car journeys so I could get stuck in again. Webb is — unsurprisingly — very funny, but there’s also a lot of vulnerability and pathos in here which he isn’t afraid to share.

8 The Canterbury Tales. I did a couple for GCE at school and haven’t looked at Chaucer’s classic since. I’d forgotten how entrancing old English can be and how well — and wittily — Chaucer tells his surprisingly relevant tales. I’m still only two tales in, dipping in and out, but it’s definitely good for the soul to venture pre-Gutenberg from time to time.

9 Record-breaking masters athlete Charles Eugster died aged 97 in April 2017, just a few months after publishing his book, Age is Just a Number. A retired dentist, Eugster had already led a fascinating life before deciding to take up bodybuilding and athletics in later — very much later — life and his journey to the top of his sport and unwavering self-belief are genuinely inspiring.

10 … and finally… While in Belgrade in October, I picked up a copy of A Guide to the Serbian Mentality, by the late Momo Kapor. It’s in no way cerebral; just one writer/illustrator painting an affectionate — and pretty accurate — portrait of Serbs, his love of adopted home (he was actually born in Sarajevo), and a glimpse into life there before the disintegration of Yugoslavia.