Just change one thing — lessons learned while SUPing at the beach… 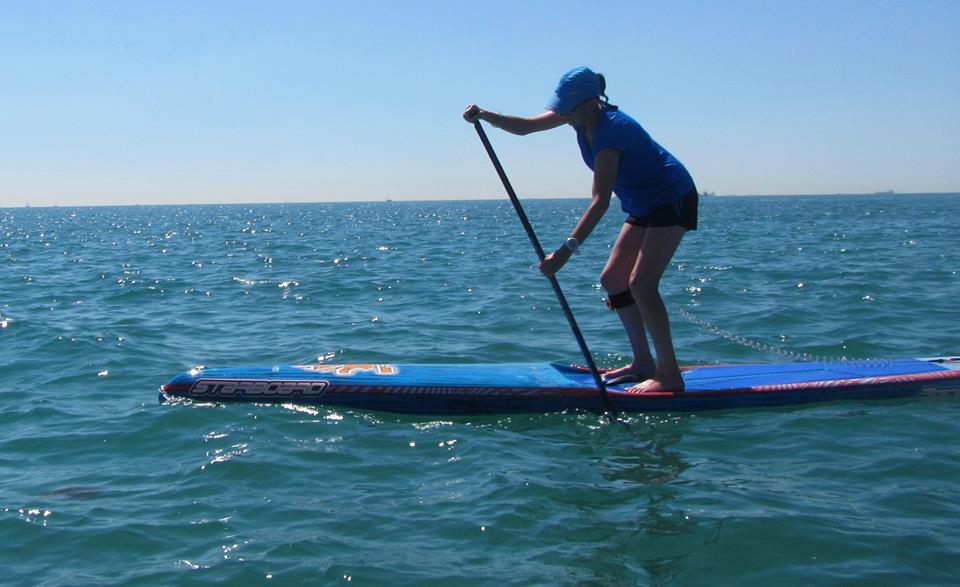 I’d never been to Hayling Island before but had heard lots about it.

My swimming mates and my stand-up paddleboarding mates all rave about this spot on the English Channel coast so when an impromptu outing popped up, I didn’t think twice.

With my partner, I set off on 15 July for an early rendezvous with a few of my fellow Bray Lake SUPers, and I am so glad I did!

The weather — this weird, un-British summer weather we’ve been having — was truly glorious: not a cloud in the sky, warming up rapidly, and not much of a wind. Well, not at that point.

Three of us kicked off our Sunday with a swim along the beach. The tide was only just starting to come back in at this point, and the water was flat calm and translucent: ideal for a leisurely pre-breakfast 1k.

But then came the serious stuff.

There was a specific reason why I was so keen to go to Hayling last weekend: I have a race just along the coast this coming Saturday. It’s at Sandbanks, near Poole, and it’s a technical race. This means 7k-worth of laps with lots of sharp buoy turns and little room for error.

Because while I had paddled on the sea before (both times in Fuerteventura), I had never done it on my Starboard. It’s not that the Race isn’t designed for the sea; it’s just that it’s not the ideal choice for the sea when the person on it is still clambering up a sharp learning curve.

But nothing ventured, and in I went. And it was actually fine. I did fall off a couple of times and progress wasn’t exactly rapid, but I stayed upright long enough to clock up a respectable 6.9k, paddling mostly parallel to the beach. 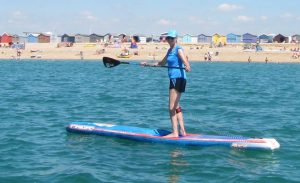 Yay, I thought. Cracked it…

Then it was time for lunch, and by now the tide was really rolling in, the wind had picked up, and there was a lot of chop. A lot. I sat and ate and watched and now I felt really apprehensive. But I knew I had to go back onto the water and see what happened because it could easily be like this for the race.

And what followed was a very short, sharp lesson: it was a completely different experience. Now I was spending at least much time in the water as on it and the waves I was failing to negotiate were pretty much matched by the waves of frustration I was experiencing.

After about half an hour of this uneven struggle, I returned to my mates. Could I borrow one of their boards, please? One that’s wider, flatter, with more volume, like the boards I spent so much time on in Fuerteventura? Of course — here you go.

I really needed to know whether I was just totally out of my depth — as it were — or whether I did have the fundamental skills but merely lacked the experience on my own much narrower board to successfully navigate these conditions.

The answer came pretty quickly: it was the latter. I was absolutely fine on the wide, flat board. I didn’t fall in once, I even managed to ride a few waves, and my confidence came flooding back.

Phew! I relaxed for half an hour and watched as the sea settled again with the falling tide, the wind dropped and the water became increasingly benign once more.

Now I felt great — back on my own board and in a happy place. Yes, I fell in a few times, but only when I was pushing my limits and seeing what would happen.

So big lessons learned here — and actually fully transferable ones!

Change one thing. It all boils down to that.

Session one saw the sea entirely playable for me and my Starboard. Session two, the conditions changed and it was no longer playable. Session three, same conditions but different board, and it’s playable again. And session four, back to pretty much the first set of conditions except even better because of what I’d learned during sessions two and three.

But what if it’s hideous next weekend? Not a lot I can do except forgive myself if I fail to finish the race: as with everything, competence — and eventually excellence — flows from practice and I need to spend much, much more time at the beach to get to a place where I’m totally at one with my own board.

And as I love being next to, in and on the ocean, that’s no hardship at all!

Here are my reflections in selfie video form…