Counting down to 80 and still pushing boundaries… 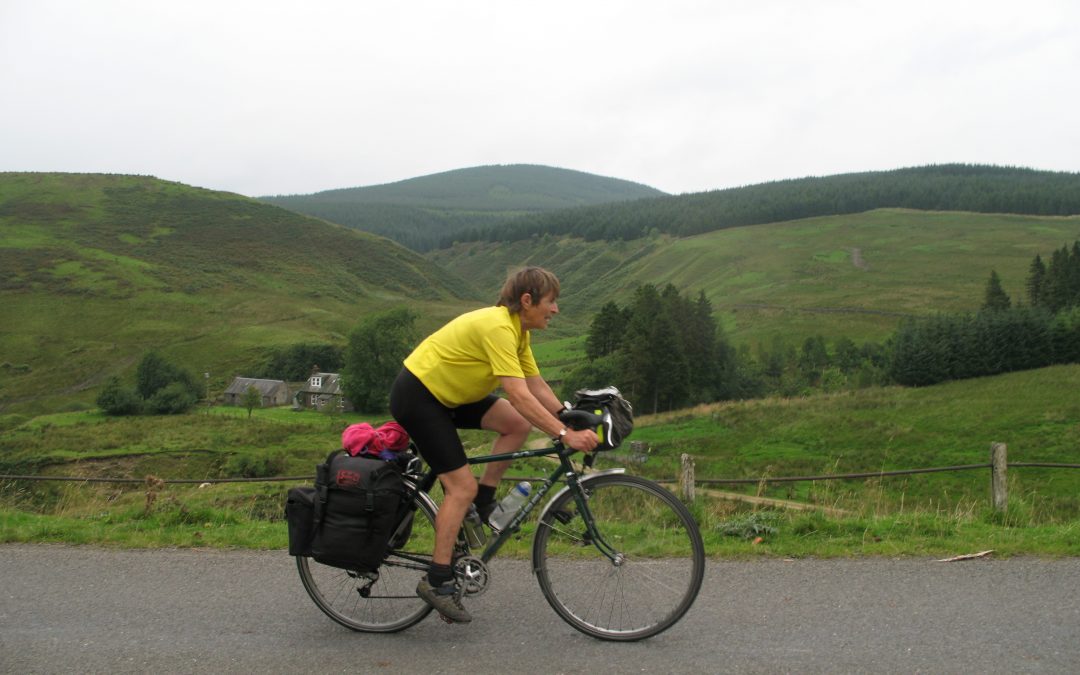 We were on the ferry heading back to Scrabster after our brilliant Orkney break in June when I became aware of a group talking about their own trip. Like us, they’d visited Hoy, but unlike us several of them had actually climbed the Old Man.

I turned around, expecting to see men and women in their late 40s or 50s, possibly even their 60s. But no. Clearly they were older than that — something confirmed when it emerged that one of the Hoy climbing team was 81!

Then I became aware of a woman in the group telling someone that she’d cycled from Land’s End to John O’Groats —several times.

And that’s how I met my first Making Waves guest blogger, Jancis Richards. She is a retired art teacher and lives with her husband David in Yorkshire. 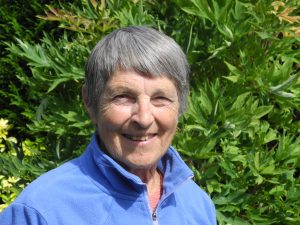 I was born in Kent in 1939 and have one older brother. We spent World War 2 in Wiltshire where my father worked on a farm before returning in 1946 to the Isle of Thanet. There my father went back to running the family draper’s shop.

My parents were fairly conventional, but free thinking and though neither of them was sporty, they loved the countryside. They took me and my brother to North Wales and the Lake District and — surprisingly! — later allowed me to go youth hostelling with a friend in my teens. This involved trudging over the Cumbrian fells in all weathers, finding our way by map reading.

I believe this experience marked the beginnings of my need for a challenge and this in turn led to an enduring love of individual and unregulated sports.

From an early age, I’d nursed a strong desire to rock climb after poring over a photo in one of my brother’s books. I just knew this was a sport I’d love and could be good at.

After school and college, I began my teaching career in London and joined the North London Mountaineering Club in 1961. Then, when, I found myself heading out of the city every weekend to go climbing, I realised it was time to move on. Next stop was Oxford for three years, then Sheffield and then the Wirral.

I had entered an entirely male-dominated sport in which no woman was expected to be active and certainly not to excel. There were very few of us back then and achieving recognition became a challenge in itself. In the late 1960s, a group from the men-only Climbers’ Club attempted to nominate me for membership by using just my initials, but somebody blew their cover.

Finally — after I had been climbing to a very high standard for a good many years — in 1975 I became the first woman to be elected to the club and later, in 1990, became its first female president. I was then invited to become a vice-president of the British Mountaineering Council, in 1993.

My first husband — we married in 1968 — was an experienced climber, and living on the Wirral was perfect as we were within easy reach of Snowdonia. In 1970, our two sons were born — both in the same year! — and I had to put both teaching and climbing on hold to focus on them. But we still managed to go walking and camping in the hills as a family. 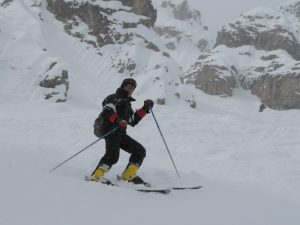 Around this time, we also learned to ski and this soon became a passion we were able to pass on to our sons who both grew up as proficient skiers.

In 1980, my marriage ended and I had to adjust to life a single parent. So I once again I began youth hostelling — this time with bicycles and two young boys in tow! As they became more independent, I was able to return to regular climbing and we also skied together.

I remarried and my second husband and I have lived in a small village near the foot of the North York Moors for the past 28 years. David shares my passion for climbing, ski-ing and cycling.

And it’s cycling that’s now my main focus. I have over the years developed severe arthritis in my fingers and rock climbing eventually just became too painful. When I realised this wasn’t going to change, it was time to switch to a different sport. 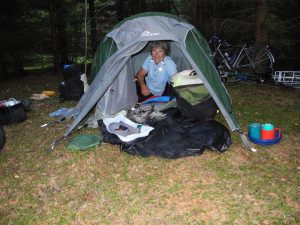 One sport that could still take me to those wild, high places was distance cycling. We’d already done a few trips, but I began dreaming of more. I have now covered thousands of mountainous miles in the UK, in Europe, and in north America, carrying panniers and a small tent.

I retired from full-time teaching in 1999 and have since been able to spend even more time cycling — often alone, as David didn’t retire until 2016. I have never minded being on my own and I’ve undertaken several long solo excursions with an even smaller tent!

I’ve also skied some of the most challenging black and off-piste French runs since retiring, including the Grand Couloir in Courcheval, which I tackled in 2011 when I was 73.

My most recent long-distance cycling trips were from Dover to Durness (1,001 miles, 15 days) in 2013, and following the river Moselle from a starting point near Basel through to Amsterdam in 2015 (790 miles, 16 days).

Then, in the autumn of 2015, disaster struck: I fell from a ladder while picking apples in the garden and suffered a serious, almost life-changing, knee fracture. All activities came to an abrupt halt for two long years. I also lost the sight in my left eye and — just to top it off! — had a second hip replacement, five years after the first.

This means I’m now cycling with two artificial hips and a screwed together knee!

At first, I did struggle to stay positive but quickly realised there was no way I could allow these setbacks to ruin the rest of my life. With that thought constantly at the back of my mind, I continue to press on.

I can now walk properly again and have returned to riding my bike in the hills. I have of course modified my goals and I still have to build back my muscle strength. But it is steadily improving and I intend to get back on my skis this winter.

I can’t pretend age doesn’t come without its challenges, but I also think that each difficulty can be dealt with somehow.

I fully intend to continue living and enjoying an active outdoor life for as many years as I possibly can.

Main image: Jancis in the Scottish Borders on her way to completing her third LEJOG — Land’s End to John O’Groats — distance cycle ride in 2008.