The second mother I found on a beach in Montenegro 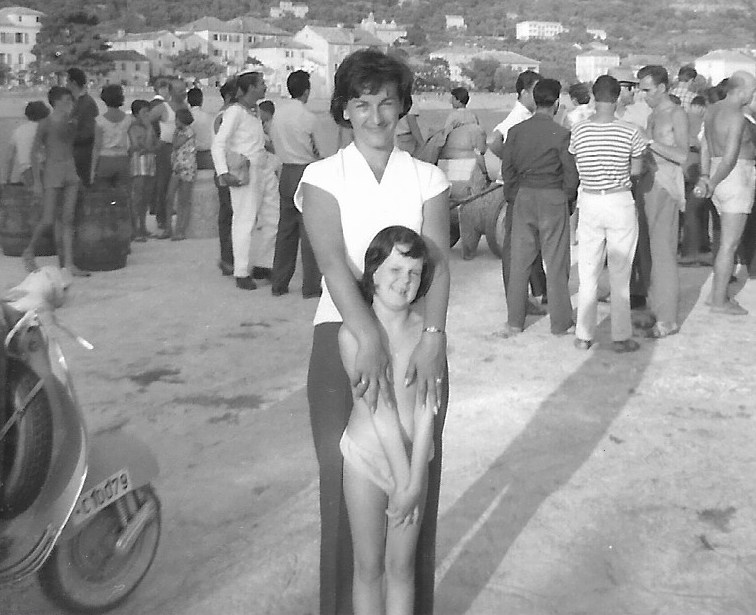 When my mother went to the beach, it was to swim a little, sunbathe a little, read a little, and snooze a lot. One thing she didn’t do was talk to anyone, apart from me and my father. They might, she said, be boring.

This ban extended to both me and Dad:  the shadow of our beach brolly was the island under which we stayed safe and silent. It was my normal from an early age. I did notice other kids playing and they seemed to be having fun, but I didn’t want to rock the boat so tended neither to protest nor stray far.

Until one day in 1961 when I would have been seven. It was our first holiday in what was then Yugoslavia, and we had driven across a large chunk of Europe in our Singer Gazelle estate to get there. We were a true novelty: Brits were rarely spotted anywhere in Yugoslavia back then, and certainly not as far south as the tiny resort of Petrovac in Montenegro.

So there we were, under our umbrella, and I notice two grown-ups nearby. A couple, mid-20s. And the woman was smiling and winking at me. The first time I looked past me to see if her target was somebody else. No, it was me. After a few minutes of her winking and me giggling, I did the unthinkable: I defied the ban and sneaked across the sand.

And so began a friendship that lasted through my childhood, through my teens, and well into my 20s before — to my eternal regret — we slipped out of contact and lost track of each other.

The woman was Gordana Božjaković, and the man her husband Miško. They were newly married and had ridden down some pretty hairy roads from Belgrade on their Vespa to reach the sea. Gordana was a professional translator who spoke 14 languages, and Miško an architect — they were smart, funny, and clearly intrigued by this little English girl on their beach.

And — crucially — they were not boring. With some trepidation, I scuttled back across the sand and under the umbrella to ask my mother if it was OK if I played with them. To my surprise she gave her consent and for the rest of the holiday, I spent most of my days with Gordana and Miško who — among other fun things — taught me to swim.

Even more remarkable, when the four grown-ups started talking to each other they seemed to get on: yay, Gordana and Miško weren’t boring! The ultimate result for me. Not only that, but when they prepared to head home to Belgrade, addresses were exchanged and promises to stay in touch made.

And — even more remarkable — the promises were kept. For the next seven or so years, we would meet every summer in Belgrade as we headed to or from Montenegro, now my parents’ favourite summer destination. At the same time, Gordana was visiting London at least once a year: she was now a foreign language film buyer, attending screenings during the day and meeting us in the evening.

Then, when I was 16, I went to Yugoslavia on my own. Indeed, I received my O-Level results over the phone while I was there. I stayed first in Belgrade with Gordana and Miško and their two children, and then we headed to the Croatian island of Brač and her family’s holiday home. (Yes, there was definitely a middle-class in Tito’s Yugoslavia!)

That was the summer when Gordana and I really forged our bond. I used her as a sounding post, I shared my adolescent angst, she truly became my second mother, and we even joked that I was her firstborn (she was only around 20 years older than me). I trusted her judgment and loved how she could empathise with the stuff I was struggling with — stuff I definitely didn’t want to share with my actual mother — and help me find the courage to move on.

I went back to Belgrade several times after that first trip, and later as an adult. My clearest memories are of us sitting outside in the evenings, talking, drinking coffee, putting the world to rights. Gordana and Miško’s marriage was volatile, to say the least, so sometimes it was my turn to listen to her but we always ended up laughing. Always. So much laughter, there and in London. Laughter until the tears ran down our cheeks.

We lost touch when I moved out of London and Gordana’s trips to the UK became less frequent: I offer no excuse for this, and it truly is one of my deepest, deepest regrets. When I tried to find her during NATO’s bombing of Belgrade in 1999, my heart sank when I drew a complete blank. I tried again at various times over the following years until I finally struck gold, finding her daughter  — no longer the little girl I remembered but a woman in her early 50s — on LinkedIn.

She and I caught up in Belgrade in 2017 and I learned that Gordana, Miško, and their son were sadly all dead and a tapestry of tragedy lay across those missing years. I felt (and feel again, writing now) a mixture of acute sadness and not a little guilt — I wasn’t there for my friend when I should and could have been.

But then I know fine well that there’s no point playing the ‘should have, could have’ game: I can’t re-engineer those lost opportunities now. I do though hope Gordana knew at some level that she was loved most dearly by that lonely little girl she discovered all those years ago on a Montenegrin beach.

Image: a slightly shy me with Gordana in Petrovac, Montenegro, 1961.