The power of a far distant cock-a-doodle-do… 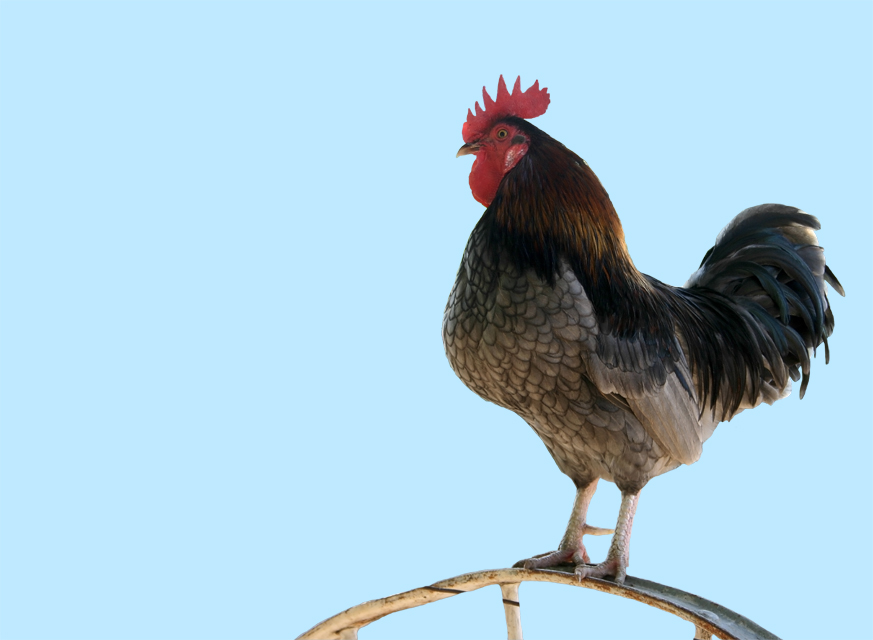 It would be really easy to go off on one and deliver my take on Covid-19.

And yes, it would be my take so not quite like anyone else’s — and after all, we’ve all got our own take on this. Oh yes.

But despite the absolute shedloads of research I’ve been doing, and the extraordinarily eclectic mix of fascinating rabbit holes I’ve wriggled down, I’ve yet to emerge with enough to add anything of much coherence to all the noise out there.

So, for now, I’ll keep my peace and instead share a tiny experience that triggered a train of meandering thought…

Molly Dog and I were ambling along the edge of a field a little while ago. It was during that first blast of glorious weather we were treated to hereabouts in south-east England as lockdown in the UK kicked in. The sun was shining, the sky was wall-to-wall blue. I was thinking of nothing in particular that I can recall and then I heard it…

…from across the field, unfiltered and crystal clear, came the sound of a cockerel doing an absolutely textbook ‘cock-a-doodle-do’.

And I was pitched right back to the image of me as a very small girl, in a mountain auberge somewhere in the Alps. Or perhaps the Pyrenees. Either way, I would have been no more than five, en route with my parents on one of their summer expeditions, in this case to or from either the French Cote D’Azur or Spain.

From somewhere I’ve dredged up Barcelonette, a town in the southern French Alps, and in the absence of any way of confirming one way or the other let’s stick with that.

So, going with Barcelonette, we would have wound our way up through the mountains to get there late afternoon or early evening. Arriving at the target hotel, my Mum would have been despatched to ask — in her immaculate French — whether they had ‘deux chambres pour une nuit’. (From a very early age, I had my own room in hotels — seems a little weird now, but it was of course my normal back then.)

And what I recall most about this hotel — apart from the sunshine, the high summer edge taken off its heat by the altitude — was the wood, the dark wood. It was, unsurprisingly given the location, a genuine alpine chalet and perhaps this was the first time I’d seen that much wood in one place. (Whatever, it appears to have left its mark because — given absolute free rein — I would choose to spend my indoor life mostly in a chalet, and probably one in the mountains. Provided the mountains were near the sea, of course, or a river, or a lake…)

But the wood wasn’t the only thing to make a large and lasting impression. There was also the chickens. Again, perhaps this was a first for this city child: maybe this was the first time I’d joined the dots in real life between the hens in my picture books and the eggs on my plate. Because I recall both from that short interlude in the mountains — the chickens pecking around outside the hotel, and the gob-smackingly delicious, vibrant boiled egg on my plate the following morning.

And I also recall — even more vividly than all that wood and all those chickens — the sound of the resident cockerel. Again, it seems highly likely this was the first time I’d heard a cock crow and I lay in my bed in my little chalet room, looking out of the window at the blue, blue sky mesmerised by this amazing sound heralding a new day. And, if you think about it, it is an amazing sound.

The cockerel carried on as I ate my egg in the tiny hotel restaurant — oddly, I don’t recall the meal in there the night before at all — and I could still hear him as we packed up the car, as Dad paid the bill from his French Francs wallet, and then as we made our way down the mountain.

That whole interlude in the late 1950s must have made its way deep into my unconscious. So deep that whenever I hear a cockerel — and particularly so on clear, sunny, days — I am unfailingly instantly transported back to that auberge and the very small me logging a moment of wonder.

As Molly and I continued our walk, I pondered other sounds that trigger memories for me and came up with quite a few — music, mostly, which I know is a common human experience. I played about with a few as we headed home, not all of them bringers of joy, but then came another crystal clear cock-a-doodle-do and there was no contest: that one wins hands down, every time.