Overcoming the scary by hanging upside down… 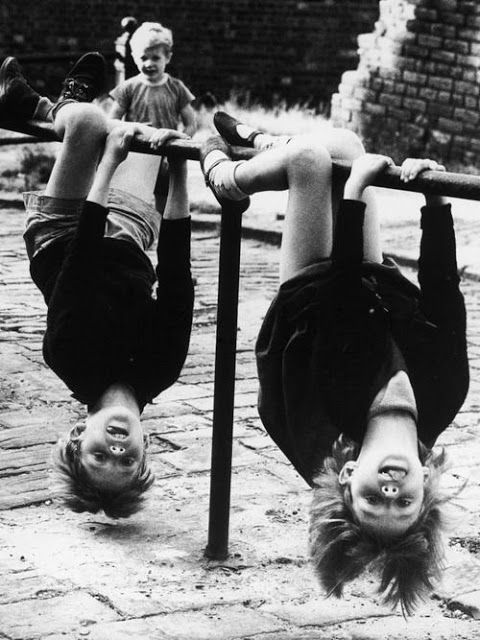 We’re at Day 12 of my 21 Days of Transience, and I’m back at school getting to grips with fear…

The day I conquered ‘swingy legs’ I felt I could conquer the world.

Getting there had taken what, to a child of around seven or eight, seemed like forever. But when I finally managed it I felt absurdly embolden and hugely proud of myself.

My school — King Alfred’s in north London — was (and still is) built around a magnificent field, a green space with room for wild exploration and unstructured play free from adult intervention as well as the usual pitches for football, hockey, and so on.

Attracting kids like magnets back in the early 1960s were two freestanding rails — a little like that in the photo only a fair bit higher off the ground — constructed specifically for DIY gymnastics. Come break time, there would be a mad rush to grab one of the four spots available on each rail as we’d take it in fairly equitable turns to perfect our moves.

I was OK at quite a few of them, and overcame modest levels of trepidation to get there, but by far and away the scariest was ‘swingy legs’. As a result, it was a much coveted badge of honour to be able to do it and for the longest time I was in total awe of those among my peers who appeared entirely undaunted by this challenge.

All it involved — a colossal ‘all’ nonetheless — was doing what the kids in the photo are doing only hanging with both legs on the rail and letting go of your hands so that only your legs saved you from falling and bashing your head off the ground. A little like a trapeze artist, if you like, only the rail was of course static.

There was no friendly playground bark to tumble onto back then, just — as memory serves — a bit of worn grass and earth. So there was a possibility of actual bodily harm and while I don’t remember any injuries, the arrangement clearly wouldn’t pass even a cursory risk assessment now and did induce a perfectly reasonable element of caution.

At that point, I wasn’t the boldest of children — I became bolshier with age — and I wasn’t all that interested in being physically active, either. But I was also pretty stubborn and that, amplified by good old peer pressure, drove me on.

Time after time after time I’d get to the point of letting go of one hand, then almost letting go of the other, only to quickly tighten my grasp and retreat to safety. It feels, from this great distance, like I did that for months but it was possibly only weeks.

Either way, the day finally arrived when I was too embarrassed to bottle it yet again, so I tentatively released the grip on my second hand and finally found myself hanging free. I was doing swingy legs, properly doing swingy legs! Look at me — I’ve mastered swingy legs!

Then, of course, it became second nature and I wondered why I’d ever been so scared, and I guess I learned a fairly interesting lesson that day, the sense of which I am only unpicking now: between fear and freedom lies often only the tiniest of transient choices, and there have been plenty more of those down the years, including right now.

Main image: children playing on a street rail in Stockport in the mid-60s. Our rails were a fair bit taller so our heads were nowhere near this close to the ground!