Brass handles, typewriters, and coffee cup rings — how a desk has left a lasting mark 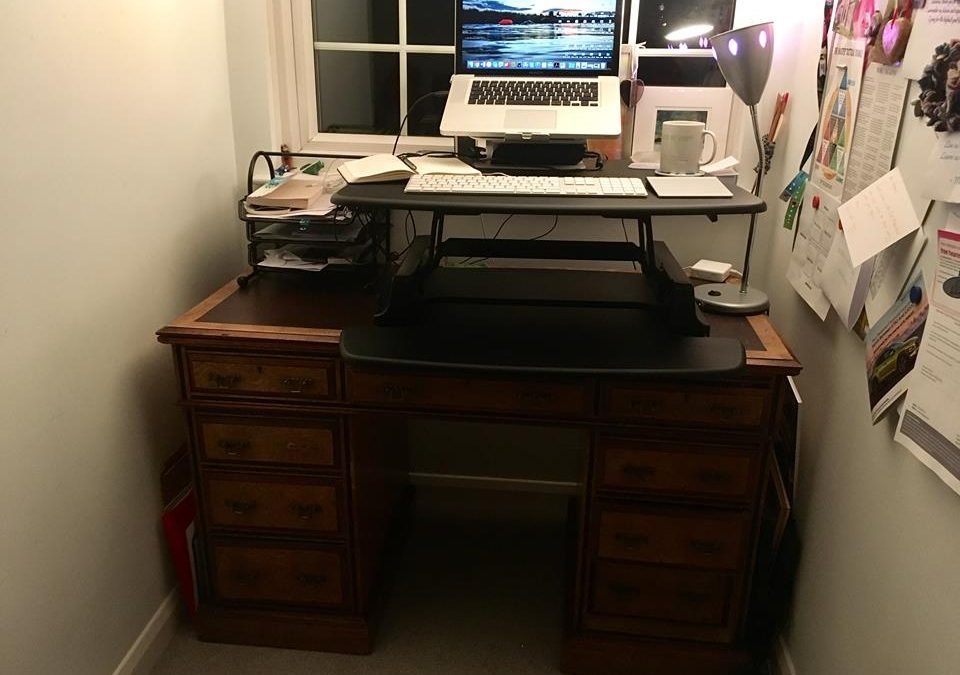 I’m writing this sat at my Dad’s desk.

I’ve no idea exactly how old it is, but it is certainly a lot older than me and it’s always been in my life. It’s a solid pedestal desk with four drawers on either side and one in the middle and the noise the brass handles make when they touch the wood is among my earliest memories.

When I was very young, my father was a professional screenwriter and it was at this desk that he wrote for early British TV shows like Robin Hood and No Hiding Place and 1950s big screen comedies including Tommy Trinder’s last movie, You Lucky People.

(This only filtered through when I was a fair bit older and why he stopped writing for a living is another story entirely.)

So let’s dive back to the late 1950s, when I’m around four or five. Vivid, still vivid, the sound — another sound — of my Dad’s Olympia typewriter as he sat in our sitting room bay window and pounded the keys, sunshine pouring in so he appeared almost in silhouette.

I somehow knew not to interrupt, but whenever he took a break I’d go and sit at the desk, legs dangling from the chair, and have a go at the keyboard. When the keys stuck together, my fingers would get a bit inky separating them, but that never put me off. I always enjoyed my typewriting, and I loved delving in the drawers, home to stationery stalwarts like manilla envelopes, packs of foolscap, spare ribbons, and carbon paper.

OK, but what, you’re wondering, does any of this have to do with leaving a mark?

Well, I can — and I will — take this in the direction of the metaphorical as well as the physical, and the starting point is the leather inlay on the top of the desk. I’m pretty sure it’s original and it’s really not in great shape. Most of it is now covered by my stand-up desk converter so the rips and the marks are no longer in my line of sight on a daily basis.

Some of the damage is down to me — this desk has moved house a few times! — but some definitely pre-dates me taking custody and I really like that: cups and saucers that were carelessly placed, maybe the odd glass of wine, a few places where ink has escaped a pen, where a paper clip got caught. All visible reminders that this is a desk that’s earned its keep.

On then to the metaphorical and the mark my Dad left on this desk, a legacy of success, of failure, of moments of inspiration, and moments of despair. I know he experienced all of that, sat where I am now, and this desk followed him everywhere he went until his death. He wrote his plays here, he wrote angry letters here, he just sat at this desk and stared out of the window.

And now history is reassuringly repeating itself. The desk sits — just as it did when I was little — in a first-floor bay overlooking a garden. It’s where I make my living, it’s where I have my moments of inspiration, my moments of despair, of success and failure. I may not write plays or TV scripts — or indeed many angry letters — but write I do, day in day out, just as I am right now.

Very occasionally I’ve pondered parting with this desk: it’s really not designed for the digital age, the drawers stick, and it’s an awkward height. But I can’t part with it. I’m not sentimental and drag very little physical baggage in my wake, but this piece of furniture has weaved its way right through my entire life and rehoming it would be akin to banishing a family member.

So stay it will and I’d like to think my daughter will sit here and ponder life’s rich pattern when I’m gone and that I in turn will have left my mark.

Photo shows my Dad’s desk, sat in the bay window where I work.