A hard lesson in humility — and a new SUP role model… 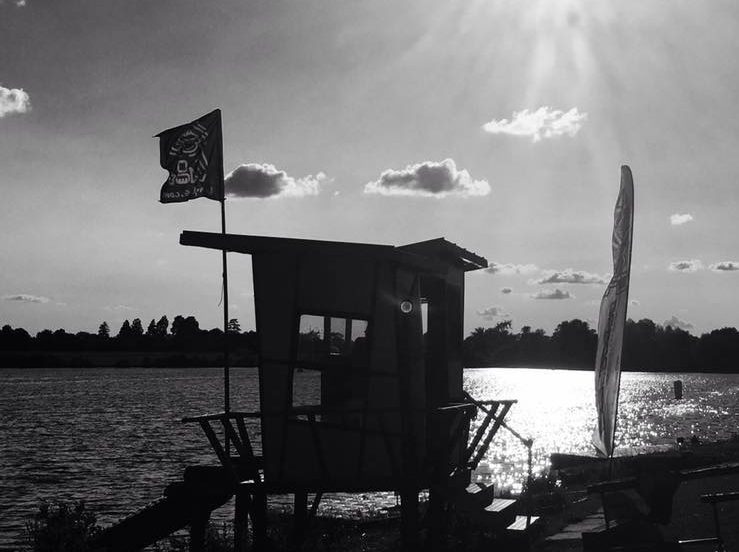 I’m fairly regularly asked ‘why do you DO all that stuff?’, and I have to say there were several moments — indeed, a whole collection of moments — during my latest stand-up paddleboarding experience when I had absolutely no idea…

I’ve been SUPing for a while now and was beginning to think I had at least the basics covered. I’d started my journey in Fuerteventura, in the never-still Atlantic, and had a session in the much calmer Adriatic in Montenegro. I’d spent many Sunday mornings at Bray Lake, including paddling into (and out of) a pretty strong wind a few weeks ago, I’d done two sessions in the dark (brilliant!), and been on the Thames a couple of times. I could feel my confidence growing with every sortie.

Calm before the storm: heading to the start of the SUP race…

Then came the first in Bray Lake’s winter race series, on Sunday 12 November. It wasn’t so much the fact that it was very windy; it was the direction of the wind and the evil 1.5k technical course the Bray guys had laid out which meant there was no escape from traversing through what felt like a 90 mph gale.

And I cocked up on an epic scale. It didn’t seem to matter how hard or in what direction I paddled, my board kept spinning sideways and ending up pointing somewhere entirely other than where I wanted to go. Other paddlers glided past in enviably straight lines as I slipped further and further down the novice field in this two-lap challenge but, determined not to wimp out, I carried on after finishing the first.

I was about a quarter of the way into the second lap, still battling board and elements, when I fell in. Not just a bit, like the bottom half, but entirely. As in water-over-the-head immersed. Because of my other water-related pastime, the lake’s 9C wasn’t an issue but I lost whole chunks of time getting upright again and was now right at the back. I was beating myself up (as you do) and also aware that I had a lot of water and wind ahead — plus some significant wind chill — before the finish, so I decided to call it quits.

I very rarely DNF (did not finish) in any race, but sometimes it’s the right choice.

And it almost certainly was here. I’ll take the experience as a massive humility check and a step along what’s clearly going to be a lengthy learning curve! Not least because while I was making a fairly massive arse of myself, another woman was quietly, most elegantly, and very quickly tackling the four-lap non-novice women’s course and coming second. Aged 66.

Enter Susan Jones, who took up SUP around seven years ago and now consistently not only finishes right up there in the 50+ veteran category but also high in the overall women’s UK rankings across different distances and race classes.

I’d heard about Susan — Bray is also her SUP HQ and where she learned to paddle so well — but hadn’t met her until Sunday’s race. She began paddleboarding after osteoarthritis ruled out other sports, and took to it like, well, a duck to water — you can read her full story here, along with a race report from 2016 here.

Let’s just say I have a new role model — I hope to spend more time with Susan and discover some of her SUP secrets, but what this whole experience demonstrates very clearly is something fundamental, something that underpins this blog project…

It’s not about gender, and it’s not about age. We can, I believe, all of us achieve so much more than we may believe we’re capable of as we grow older, whatever the obstacles along the way. We just need to find what it is that helps empower us and liberate us from our preconceived ideas about what life ‘should’ look like at this age, or that age.

For Susan, it’s latterly been SUP and for me it’s been open water swimming and, now, also SUP. I’d love to know what’s working for you — please do share below…